Ultraviolet light emitting diode (UV LED) technologies are rapidly being adopted and used in a variety of applications; this progression is increasing year-over-year and continues to gain momentum. Significant improvements in the design and reliability of UV LEDs, especially within the UV-A wavelength range (320 – 400 nm), has accelerated their adoption.  The inaugural UV LED 2015 conference held in Troy, NY on October 27-28 provided further proof of the major headway UV LEDs are making into several markets, including UV curing.  The technology conference was hosted by RadTech, in partnership with NYSERDA and Rensselaer Polytechnic Institute (RPI), and focused on the emergence of UV LEDs, their challenges, and the latest advances in UV LED curing technology.

When compared to conventional light sources, like mercury vapor lamps, LEDs offer several key advantages that are helping to accelerate their adoption into the UV curing market. LEDs have longer lifetimes compared to traditional lamps, which reduces maintenance costs and downtime. Unlike mercury vapor lamps, LEDs have instant on/off capabilities and their power can be varied. This level of control creates more efficient and productive curing operations with greater throughput.

Due to the way LEDs generate light, they produce near-monochromatic light, which helps to reduce undesired wavelengths of light and excess heat on the curing target.  LEDs, especially those in the UV-A range, can offer excellent efficiency and energy savings compared to traditional light sources.  Also, they are environmentally friendly and require no RoHS and REACH exemptions.

However, LEDs do exhibit several challenges when designing with them.  They tend to be more expensive than traditional lamps, and their price can rise dramatically, especially for LEDs in the UV-B (280 – 320 nm) and UV-C (200 – 280 nm) wavelengths.  Within the UV curing market, most photoinitiators and chemicals used for curing were formulated for use with a traditional mercury vapor type lamp that has multiple peaks and a broad spectrum for absorption during curing. These chemicals may need to be altered or reformulated entirely to be compatible with the relatively narrow band of UV LEDs.  LEDs also require significantly more technology than traditional light sources, and as new markets adopt them, there tends to a significant learning curve. Because the light that LEDs produce is so different than traditional light sources, many are challenged to design fully optimized UV LED lighting fixtures. The thermal management requirements of the system can also be prohibitive as excess heat generated by the system is detrimental to the output and lifetime of the LED.  Complex air cooling or liquid cooling mechanisms are often required to maintain peak performance of the LED system.

The technical presentations and roundtable discussion at the UV LED conference confirmed many of the advantages and disadvantages described above. The industry appears to be enthusiastic in regards to UV LED adoption, as attendance at the conference was strong. The conference included seven presentations, a panel discussion, and a lively exhibition with more than 20 participating companies.  A brief recap of the conference is outlined below, including highlights regarding UV-C LEDs and surface curing, UV optics to improve irradiance uniformity, and the need for UV LED measurement standardization.

The UV LED conference consisted of seven presentations and a panel discussion that was moderated by Patrick Henry, WhatTheyThink.com. The panel discussion focused on the current state of UV LED technology applications and consisted of representatives from across the UV curing marketplace. In general, the panel was enthusiastic and optimistic about the adoption of LEDs within the UV curing market.  In some areas, they strongly felt that the adoption would be quick while other markets may be slower to adopt.  They also stressed the need to reassess the current state of LEDs as many of the “myths” of the past are becoming obsolete.  In fact, LEDs are becoming more reliable, less expensive, and in many cases, they are a true alternative to traditional UV lamp systems.

Jennifer Heathcote of Phoseon Technology, shared insights on the current state of UV LED technology and their emergence in new UV curing applications. In her presentation, “Technology Trends Driving the Adoption of UV LED Curing” she discussed the eager acceptance of UV-A LEDs within the curing market and their growing market share. At the critical curing wavelength of 365 nm, UV-A LEDs have shown peak irradiances of 8 W/cm2 in air cooled systems and 12 W/cm2 with water cooled systems. In terms of irradiance, UV-A LEDs outperform both mercury arc and microwave plasma lamps at this wavelength.  At slightly longer wavelengths (385, 395, 405 nm), LEDs have shown even greater power with 12-14 W/cm2 in air cooled systems and 20-25 W/cm2 with water cooled systems. Besides the obvious power advantages, the longer lifetimes of LEDs was also stressed with some units lasting longer than 50,000 hours in the field. When compared to traditional mercury vapor sources, 50,000 hours is a significant improvement in lamp source lifetime, which typically only last 2,000 hours in an application.

One of the challenges in working with LEDs, as previously outlined, is the potential need for reformulation of existing curing chemicals.  Several presentations touched on this point, including “The Effect of Mercury versus LED Light Sources on Tack Free Curing” by Mike Idacavage of Colorado Photopolymer Systems and “Improved Surface Cure with UVC LEDs” by Marvin Ruffin of Excelitas Technologies.  The issue with using single peak LEDs is that they do not have the same multi-peak, broadband spectrum that is exhibited by mercury vapor lamps.  Most of the common photoinitiators were designed around these traditional broadband spectrums, and curing of these chemicals is often less effective with UV LEDs.  This is primarily due to the lack of UV-C light in most UV LED systems.  In Mike’s presentation, he shared research that examined multiple photoinitiators and bulk chemistries but found that UV LED systems based solely on UV-A LEDs did not produce tack-free surfaces. However, this could be expected as the chemicals he selected for the study were designed for mercury vapor sources and require UV-C wavelengths to surface cure. The key takeaway from his presentation was that if you’re using LEDs in your curing system, the photoinitiators and chemicals must be selected carefully and optimized for the LEDs.

Marvin Ruffin highlighted some of the advances being made in the development of UV-C LEDs.  In his presentation, he showed LED curing fixtures that were retrofitted with UV-C LEDs (285 nm) that were able to achieve 40 mW/cm2.  Even at these reduced power levels, he presented results that showed an improved surface cure, with no tackiness, and reduced “wait times” required. He demonstrated that current UV-C LEDs may be powerful enough to yield surface cures that are effective, which could potentially eliminate the need for reformulation.  However, the price and lifetime of these LEDs still needs improvement to become a viable market option.

His presentation focused on the use of secondary optics with UV LED arrays to improve uniformity and irradiance.  He discussed the design and testing of a secondary glass optic that was used with two different LED arrays, one that exhibited dramatic non-uniformity and another that produced a relatively uniform irradiance pattern. When compared to a traditional flat window cover, Brian was able to show a 20% increase in relative irradiance with one array, as well as a reduction in non-uniformity by 30% with the other array.  His presentation demonstrated that for some applications, a secondary optic could increase irradiance and improve the uniformity of UV LED light output.

Another topic of interest at the conference was the need for improved measurement and standardization within the UV light region.  During the presentation “The Status of UV LED Measurement Standardization,” Joe May and Jim Raymont of EIT Instruments stressed that accurate and standardized measurements are necessary for effective communication between all stakeholders.  Current UV measurement instruments use different means to measure the UV light output, which sometimes results in significant variation in data.  They discussed how they are developing sensors that incorporate new filters that will provide for more accurate measurement of the longer wavelengths in the UV-A region (385-405 nm).  In general, UV curing depends on three things:  wavelengths, irradiance/intensity, and time exposure. Without standardized and accurate test and calibration methods to measure these factors, results will expectedly vary between stakeholders.  Measurement standards act as a critical communication tool that enables informed and accurate dialogue between all members of the UV curing community.

Dr. Bobby Berg of the National Institute of Standards and Technology (NIST) furthered the discussion on calibration and measurement standards during his presentation, “Comparison of Commercial LED Sources and Radiometry:  Thoughts on Developing a Universal Measurement Protocol.”  He emphasized that NIST realizes there is a need for proper, standard measurement and calibration techniques similar to how they were developed for LEDs within the visible region.  He reiterated the need for industry support and collaboration and discussed the potential for an industrial consortium to sponsor research geared towards the development of applicable standards and calibration methods.

The UV LED conference provided attendees the opportunity to discuss and learn about the current and future state of UV LEDs.  The adoption of UV LEDs is gaining momentum in numerous UV curing, packaging, and large format printing markets.  Moving forward, the industry will look to increase the window size and working distance to facilitate larger format curing.  With the advantages that UV optics provide, these future goals are well within reach.  The need for common test methods with standards and calibrations remains a priority for the industry to ensure open and informed communication between stakeholders.  The conference also showed the need for early communication and collaboration between all levels of the UV curing marketplace as many factors can influence the UV curing outcome. Following the conference, the outlook for the adoption of UV LEDs remains optimistic as they continue to improve and see accelerated adoption into new markets. 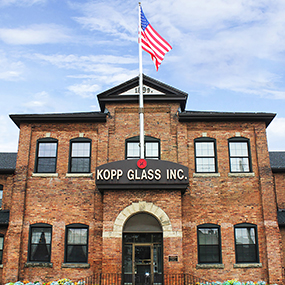 About the author: Kopp Glass